Music Composition and Technology Professor Mike Frengel will be giving a talk on
the spectral-domain representation of sound next Monday! Grab a slice of pizza and
learn how this representation affects the way we analyze sound and how sound can
be transformed. 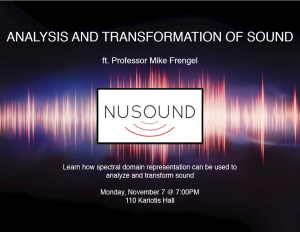 Description:
Professor Mike Frengel will be discussing spectral-domain (or frequencydomain)
representation of sound and how it can be used for the analysis and
transformation of sound. While time-domain analysis demonstrates how a signal
changes over time, frequency-domain analysis demonstrates how much of a signal
lies within a given frequency band over a range of frequencies. It is a deeper
analysis of the time-domain signal. Prof. Frengel will discuss the application of this
concept to sound.

Featured Speaker(s):
Mike Frengel (b. Mountain View, CA, 1972) graduated with a B.A. in electroacoustic
music from San Jose State University in 1995, where he studied music composition
with Allen Strange and Dan Wyman. He spent another three years in the San
Francisco Bay Area working at Apple Computers Inc. as well as remaining affiliated
with the C.R.E.A.M. Studios at SJSU as a Research Scientist. Mike completed his
M.A. in electroacoustic music composition at the Bregman Studios at Dartmouth
College in 1999, where he studied with Jon Appleton, Charles Dodge, Larry
Polansky, and Christian Wolff. He completed his Ph.D. at City University, London,
where he studied composition with Denis Smalley. Mike was a prize-winner in the
2000 Luigi Russolo Composition Competition. His works have been included on the
Sonic Circuits VII, ICMC’95, CDCM Vol.26, 2000 Luigi Russolo and ICMC 2009
compact discs and are performed at music events around the world. Mike is currently
on the faculty of the music departments at Northeastern University and Boston
Conservatory, where he teaches courses in music technology and composition.