Gizmologist and instrument-maker Len Solomon will perform excerpts from his comedy/music show, “Solomon Conducts Himself”, presenting your favorite symphonic compositions arranged for One-Man-Orchestral Ensemble, which includes the Majestic Bellowphone: a masterpiece of Medieval technology.

After the performance, he will present an in depth show-and-tell discussion of the design and building process involved in creating his array of unique musical instruments. Central to the discussion will be the mechanics and variants of the three distinct types of organ pipes: Flue pipes, Beating-Reed pipes, and Free-Reed pipes; all of which are featured in Solomon’s creations.

Leonard Solomon – Len has been performing since the early ’80s, has performed in venues from Jordan Hall, Boston to theaters in Singapore and Japan, and has been featured several times on national TV. 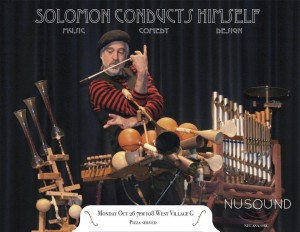