Almost everybody knows what a guitar sounds like, but not many know the acoustical science behind it. This presentation will deal with the complexities of building an acoustically balanced instrument and what a player would demand in a high quality guitar.

There will also be a musical presentation by Professor Ward and free pizza! 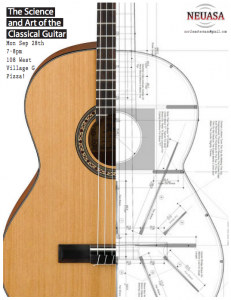 ROBERT WARD holds degrees in guitar performance from the San Francisco Conservatory of Music, BM, and the University of California San Diego, MA.  He has studied with Angel, Pepe and Celin Romero, Michael Lorimer, Lee Ryan, and George Sakellariou.  He has also participated in master classes with Pepe Romero, Abel Carlevaro, Jose Tomas, Jordi Savall, and Jurgen Huebscher.  Mr. Ward has performed extensively throughout the New England area, Texas, California and Hawaii.  In Paris, he premiered three works written for him at the famed Theatre de Renalgh. At the 4th & 5th International Guitar Congresses in Corfu, Greece he was a featured performer and teacher. In San Diego, Mr. Ward was active with both the La Jolla Playhouse and the San Diego Public Theater, as well as participating in rare performances of El Cimmaron by Hans Werner Henze. Recent performances include appearances at The Guitar Foundation of America in La Jolla, Ca., La Primavera in Habana festival of Electro-Acoustic music in Havana, Cuba, and Beijing, China  teaching and performing for the Tutti Festival 2013.Robert Ward is a faculty member at Northeastern University, and The Brookline Music School.  Mr. Ward has recorded for Centaur Records.