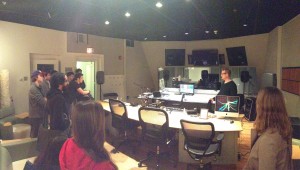 Soundtrack is a full-service post-production facility that has been in operation for over 25 years. Their producers and editors have sound-posted hit TV shows such as Sex & the City, Royal Pains, and Boardwalk Empire. They also do ADR (automated dialogue replacement) in other shows like White Collar, True Blood, and Homeland. For film-mixing, their work can be heard in movies such as The Departed, Hugo, and The Devil Wears Prada. Tim will be giving a tour of Soundtrack’s Boston facility containing six studios and will also talk about his experiences in the audio engineering world.
Guest Speaker: Tim Reppert is a composer, bassist, recording engineer and producer at Soundtrack Group. He studied at Berklee College of Music, and has worked as a recording engineer and studio session musician in New York City, Boston, and Ithaca where his own production studio now flourishes. Tim has been involved in every facet of audio, with TV and Radio advertising (General Mills, Coors, McDonalds, Ford, GMC) as both production and music engineer. Platinum award winning music engineer for artists like Whitney Houston, Billy Ocean, Isaac Hayes, Slayer, and many more. These days Tim’s focus is on composing and producing music, as well as overseeing operations for the AirCraft Music Library, having composed over 150 pieces, and produced over 700 in the last 5 years.