Dr. Leo Beranek earned his BA from Cornell College in Iowa, and went on to study at Harvard University earning his BS in 1940. He then stayed at Harvard working in the Electro-Acoustical Laboratory during World War II. Following many years at Harvard, Dr. Beranek became an Associate Professor of Communications Engineering at MIT  where he stayed on staff as an associate professor while being s the Technical Director of the Acoustics Laboratory at MIT until 1958. In 1952 Dr. Beranek became the president of one of the largest acoustical consulting firms; Bolt Beranek and Newman, where he specialized in opera hall and concert hall acoustical consulting.

In honor of the acoustical pioneer, Leo Beranek, the Greater Boston Regional Chapter of ASA hosted a celebration at Boston’s Symphony Hall. The celebration consisted of an afternoon concert given by the BSO, which was followed by a reception.

There were approximately 40 students in attendance from both Northeastern, University of Hartford, and Emerson. Leo Beranek has been a member of ASA for 75 years. 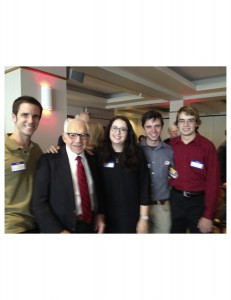 President Victoria Suha and Vice President Eric Doyle of NEUASA pictured with other students and Leo Beranek at his birthday celebration.